It was only a matter of time, and now it has happened: GGPoker is ranked No.1 at Pokerscout in terms of global cash game player numbers. Currently, GG has a 7-day average of 5,000 players, while PokerStars is at 4,800. While this change of the guard was expected, many assumed that it would not take place until the next edition of the WSOP Online 2021 in August, but it turned out that hosts GG didn’t need that boost and were in fact ahead of the curve. 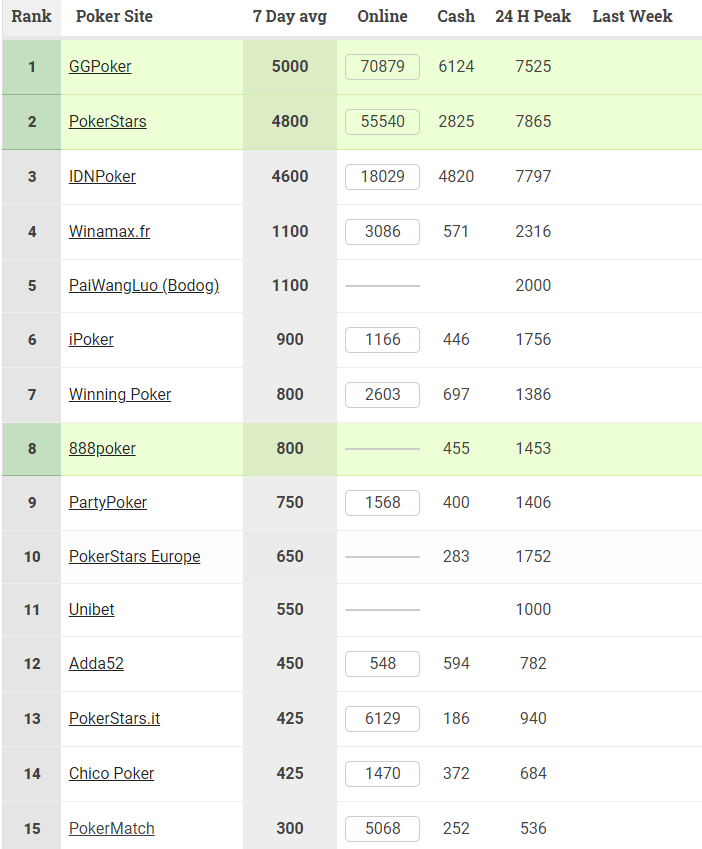 The question now arises whether or not GG can stay at the top in the long run, and possibly even extend its lead. Such a development would certainly have negative implications for PokerStars given that they’ve enjoyed their position at the top of the pile for such a long time but, as we have been predicting for a while, it’s an inevitability that’s simply been a matter of time. The number of players at Stars has been falling for years, which is partly due to the numerous changes and a shift in strategy that met with considerable disapproval, as well as the number of countries that have been excluded from gaming. GG has a great advantage here, especially thanks to the Asian market. However, in Europe they will also continue to grow, and anyone who thinks that the GGNetwork’s journey has already peaked and ended is mistaken. Of course, the rate of growth will now slow down a little, and it won’t continue at the pace it enjoyed over the last two years, but the player pool will continue to grow nevertheless.

The right strategy, with a product aimed at the masses, makes all the difference

Now, of course, it is understandable to wonder how this change at the top of online poker came around so quickly? Years ago people thought that only partypoker had a chance of creating any kind of noteworthy competition, but now they can barely maintain a place in the top 10, and it’s GGPoker who ultimately ascended to the throne.

A key point of success is that GG has managed to find a middle ground when it comes to dealing both with casual gamers and professional gamers. A product has been created that is actually more geared towards casual gamers but at the same time appeals to professionals and other more serious players. Many online poker rooms have already tried this but failed miserably.

Technically, GGPoker is on a completely different level from the competition in terms of software and features. The product is appealing in terms of design, and there are so many unique features that provide a very special gaming experience for players. Not everyone might see it this way, or perhaps not consider such features as important or even necessary, but the fact is that the majority of the online poker community is happy with the playing environment and, ultimately, that’s what counts.

You can’t reinvent poker, of course, but GGPoker still manages to conjure up new, revised formats that are not available anywhere else. This is the case with, for example, Flip & Go tournaments or the brand new Battle Royale SNG games.

In contrast to PokerStars, they are interested in working actively with the big affiliates and, on this front, have taken a more forward-thinking, proactive stance. Stars had a policy that was intended to work without affiliates and gradually moved away from them over the years. Only now have they been forcibly reminded that this decision was probably not so wise after all, leading them to reconnect and again actively look for cooperation with affiliates.

The situation is similar when it comes to rakeback. You can argue about GG’s Fish Buffet and PVI set-up, but it is still more than Pokerstars offers, and is still profitable even for serious and professional players despite the low PVI. Furthermore, there are also daily rake races and something extra from the affiliate for those who prefer to play at GGPoker. At Pokerstars, on the other hand, they have had a 0% rakeback strategy for a long time; they unofficially throw 40% rakeback and various reloads around, but it is evident that GGPoker simply were smarter regarding this key aspect of the game.

Terms and Conditions apply.
This offer is only for new customers who are at least 18 years old.
If you need some help with yor gambling pattern and if you feel
that something goes wrong, please visit begambleaware.com

The last changes of the page “GGPoker replaces PokerStars as Official No.1” was made by YPD on June 24, 2021

The post GGPoker replaces PokerStars as Official No.1 appeared first on Yourpokerdream.com.

View all posts by: admin